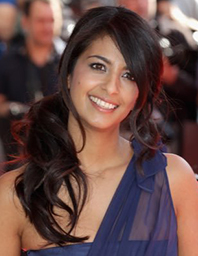 Konnie Huq is a British television presenter and writer. She was educated at Notting Hill & Ealing High School in London and left school with nine GCSEs and A-levels in physics, mathematics and chemistry. She studied sciences for her A-Levels, but chose to study economics at Robinson College, Cambridge and graduated from Cambridge University with a 2:1 degree.

Konnie is best known for presenting the BBC children's television programme Blue Peter, which she joined on 1 December 1997. One of her most memorable early moments on Blue Peter was visiting Bangladesh, and speaking to members of her extended family whom she had not seen for many years. Konnie has also been a celebrity ambassador for the British Red Cross, for which she recorded the video "If I had HIV, would you kiss me?" as part of a campaign against stigmatisation of people living with HIV. She hosted the West London Business Awards 2017.