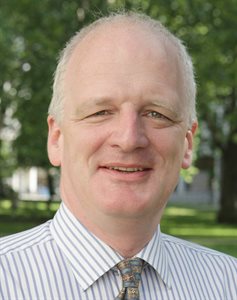 Professor Andrew George joined Brunel University London as Deputy Vice-Chancellor (Education and International) in 2013. He is responsible for the education and international strategy of the University, as well as the annual planning round.

Andrew George did his first degree at the University of Cambridge, before going on to the Tenovus Laboratories in the University of Southampton to do his PhD with Professor Freda Stevenson, developing a vaccine for B cell lymphoma. He was awarded a Beit Memorial Fellowship and stayed in Southampton for his first postdoctoral period, before going to Dr David Segal's laboratory in the National Institutes of Health (NIH), Bethesda, USA, where he used recombinant techniques to generate novel antibody molecules. In 1992 he returned to the UK as a lecturer at the Royal Postgraduate Medical School, Hammersmith Hospital, which merged with Imperial College London in 1997. At Imperial he was Professor of Molecular Immunology and Director of the Graduate School and the School of Professional Development.

In a voluntary capacity Andrew is a Director of West London Business.