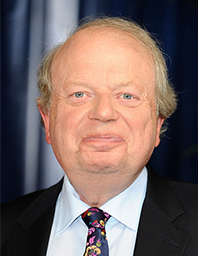 One of the best-known faces on television, John Sergeant was the BBC's chief political correspondent from 1992-2000. After leaving the BBC to join ITV News, he was voted the Best Individual Television Contributor of the Year at the Voice of the Listener and Viewer Awards for 1999. He joined the corporation as a radio reporter in 1970 and covered stories in more than 25 countries. John worked as a war correspondent in Vietnam, Cyprus, Israel, and Rhodesia. He also regularly reported from Northern Ireland (he reported the first British soldier killed during the Troubles) and has also been an acting correspondent in Washington, Paris and Dublin. For two years he covered European affairs and the first sessions of the directly elected European Parliament. In 1981 he became a political correspondent for television and radio.

He wrote and presented a BBC TV documentary series called The Europe We Joined. He has also, at times, presented all the main current affairs programmes on Radio 4, including Today and The World at One. In 1966, Alan Bennett chose him from the cast of the Oxford University comedy revue at the Edinburgh Festival to appear in the award-winning BBC TV comedy series On the Margin with Alan Bennett. John had already been accepted as a news trainee with Reuters but gave that up to work with Bennett. He went back to journalism the year after and spent three years as a reporter on the Liverpool Echo before coming to London to join the BBC in 1970. John Sergeant's career in light entertainment lay dormant for many years while he built up his image as a serious political correspondent. Among his notable journalistic achievements was his encounter with Margaret Thatcher at the Paris Embassy days before she resigned as Prime Minister in 1990. The way he was pushed aside by Lady Thatcher's press secretary, Sir Bernard Ingham,

has become one of the most famous live broadcasts of recent times. Many saw it as a metaphor for the end of her regime. He won a British Press Guild award for the most memorable broadcast of the year, beating the footballer, Paul Gascoigne who was nominated for bursting into tears during a vital match in Italy. Among John's major scoops was the only interview with the Welsh secretary, Ron Davies, after he was forced to resign over the incident on Clapham Common. John has frequently reported on Prime Ministerial visits abroad in countries including the United States, Japan, and India. There was another famous encounter with Margaret Thatcher in Moscow in 1987 when he suggested she had begun the election campaign... "I am serving my country," she snapped, implying that John was not. His long-adjourned career in comedy was revived in 1998 when he appeared in an edition of Have I Got News For You on BBC 2. Ian Hislop said he had been one of the funniest guests in the history of the programme. Other

comedy successes followed, including a memorable encounter with Paul Merton in Room 101 on BBC2 when John listed his pet hates, including the BBC TV programme, Casualty. On Radio 4 he has been a guest on the News Quiz and many other programmes including A Good Read. He has also presented Pick of the Year. His book published by Macmillan, Give Me Ten Seconds, was described as "An all-time rip-roaring read" by the Independent on Sunday.