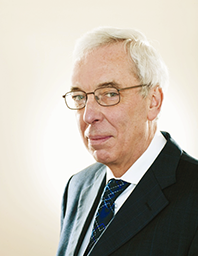 Dennis Turner is the Chief Economist of HSBC Bank plc in the City. His role involves advising lending bankers on economic trends not only at national level, but also on industries and regions.

Before joining Midland Bank in 1978, he worked for four years in Whitehall, for the National Economic Development Office. This was during the Labour government’s Industrial Strategy Initiative, which was an attempt to improve the performance of the UK’s manufacturing sector.

His first job on leaving university (Swansea and University College, London) was as an economist for a national trade union. Here he was responsible for the preparation of pay claims, arbitration cases and the union’s submission to various statutory bodies set up under Edward Heath’s Industrial Relations Act.

His principal interests outside office hours are music and football and his publications include the definitive history of Fulham Football Club, the need for an Industrial Investment Bank in the UK, analyses of the textile and construction industries, and critiques on the recordings of Van Morrison, Joe Cocker and Ray Charles.