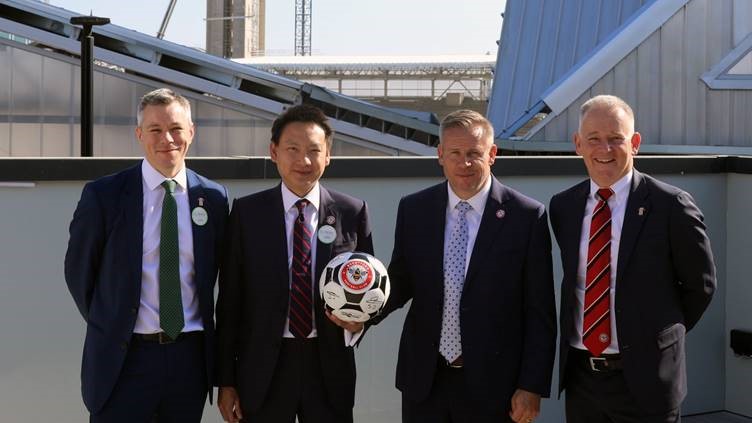 EcoWorld London, the business delivering a new home for Brentford Football Club, are coming on board as Principal Partner and will feature on the front of the Sky Bet Championship side’s shirts for the upcoming season. EcoWorld London is the Club’s development partner on the new 17,250-seater Brentford Community Stadium, set to open next summer. And as The Bees say Farewell Griffin Park in 2019/20, EcoWorld London will be the Club’s main sponsor.

The Brentford Community Stadium development project is an important part of the wider regeneration of the area known as Brentford East, set to create a new neighbourhood for London. In addition to the new state-of-the-art stadium, the development will deliver a new purpose-built location for Brentford FC Community Sports Trust, a public square with shops, cafes and restaurants as well as more than 900 new homes for sale and rent.

The partnership will see Brentford FC and EcoWorld London supporting each other on upcoming projects and events and there will also be involvement in the local community. As an integral part of the enhanced partnership, EcoWorld London are also joining forces with the award-winning Brentford FC Community Sports Trust with the aim of creating sustainable improvements in local facilities and active opportunities for people in surrounding communities.

EcoWorld London was launched in 2018 after EcoWorld International acquired 70 per cent of Willmott Dixon’s residential business. It currently has nine ongoing projects in the UK, including the Brentford Community Stadium development. The firm was an Official Platinum Partner for the 2018/19 season and is now Principal Partner for the 2019/20 season, Brentford’s last at Griffin Park, the Club’s home since 1904.

Heng Leong Cheong, CEO of EcoWorld London, said: “Coming on board as Principal Partner with Brentford FC was a natural decision for us. Having worked closely with the Club over the years both on their new Community Stadium and as a Platinum Partner previously, we are confident that this is a partnership of mutually ambitious and passionate organisations, with great plans to grow and contribute to our great city.

“Brentford FC aims for excellence on and off the football pitch, while for us it’s in the places we create. Despite being only slightly more than a year old, we want to be recognised as a premium developer creating outstanding places in London that enhances the lives of our residents and the surrounding communities.

“EcoWorld London prides itself on being an organisation which actively improves and gives back to the places we build in, an ethos shared with the Club and their Community Sports Trust. This enhanced partnership is testament to that commitment, and we look forward to collaborating further and supporting the great work they do in the London Borough of Hounslow and beyond.

“We are excited to be part of this milestone year for the club in their final season at Griffin Park and look forward to welcoming them and their fans to their new Brentford Community Stadium home next year.”

Jon Varney, Brentford FC Chief Executive, said: “Our relationship with EcoWorld London has continued to develop I am delighted they will be on the front of our shirts for our final season at Griffin Park. We are doing a lot of work to ensure we say Farewell Griffin Park in the best way possible and it is very pleasing that EcoWorld London will be a part of that. I look forward to our fans seeing our new kits soon.

“EcoWorld London have shown a long-term commitment to Brentford FC and the local community and that will be shown in their increasing work with the Trust in the next year. I know they want to build a fantastic neighbourhood around our new stadium that will greatly benefit our fans on matchdays as well as residents. I hope this relationship will continue for many years to come.”

Lee Doyle, Brentford FC Community Sports Trust Chief Executive, said: “We are excited to embark on this new journey with EcoWorld London. This partnership is designed to work both on and off the pitch and will provide us with the opportunity to expand our existing projects – supporting local communities most in need.”

EcoWorld London’s branding will be displayed around Griffin Park and also on the front of Brentford FC kit for the coming season. The bespoke shirts, created by Brentford’s new Technical Partner Umbro, will be revealed in the coming days.