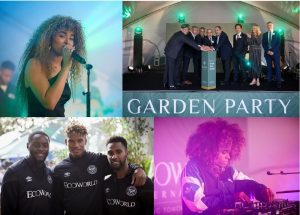 On the 15th August, EcoWorld London launched Jasmine House, the second phase of their Verdo-Kew Bridge development, a new neighbourhood within well-connected and burgeoning Brentford, with a celebratory summer garden party. The evening was well attended by the community, local influencers and interested buyers for the area.

The celebration, inspired by the surrounding green areas of Brentford and the botanicals of neighbouring Kew Gardens, was held on site with special performances by West London local and BRIT award-winning artist, Ella Eyre who performed an acoustic set which included her newly released single ‘Mama’. There was also a DJ set from chart-topping artist, Fleur East who got the crowd dancing. As the Principal Partner for Brentford FC, players from the team including Rico Henry, Pelenda Joshua Dasilva and Christian Norgaard were also at the event to meet and greet the fans.

KERB, and their top London vendors, Hanks, Smoke & Bone, and Vicky’s Donuts served up an amazing array of tacos, burgers and doughnuts along with Paparich’s traditional Malaysian food offering.

On the night, attendees also had the opportunity to get a first look at Verdo-Kew Bridge and Jasmine House, the second phase of homes within the development to be released to the market, with an exceptional collection of 84 homes for purchase located next to Kew Bridge station. The contemporary, spacious and light-filled apartments in Jasmine House will range from one, two and three bedrooms as well as offering Verdo-Kew Bridge’s first set of studio apartments. The spacious apartments benefit from tall windows which lead on to elegant balconies with quality finishes used throughout. Prices of the apartments start from £350,000.

Residents of Jasmine House will have immediate access to a comprehensive set of premium amenities including a 24-hour concierge service, a spacious and private residents’ lounge which include work zones and a meeting room, gym and multimedia room as well as extensive communal space including, sunlit terraces, play areas and a private residents garden. The development is designed with EcoWorld London’s signature and diligent focus on quality and style, offering residents outstanding contemporary living.

Part of Brentford’s multi-million-pound regeneration project, EcoWorld London has deployed its global expertise working on some of the most high-profile projects in the UK to create a vibrant new neighbourhood in West London. With a range of shops, cafes, restaurants and landscaped gardens, alongside Brentford Football Club’s new state-of-the-art football stadium, residents of Verdo-Kew Bridge will be at the heart of one of London’s most exciting new destinations.

Exceptionally well located, the development sits next to Kew Bridge Rail Station and nearby Gunnersbury Station on the District Line and Overground, allowing access to central London within 30 minutes. Verdo is less than half a mile to the M4, offering direct motorway journeys to Heathrow, and the West as well as easy access to the M40. It also enjoys a riverside location, just minutes from the River Thames and surrounded by a number of beautiful parks including the iconic Royal Botanic Gardens at Kew.

Verdo is within easy reach to the Golden Mile, home to over 200 companies such as BskyB and GlaskoSmithKline, as well as Chiswick Business Park, a commerce hub with world leading global, European and national headquarters.

Verdo-Kew Bridge also benefits from its proximity to some of the area’s leading schools. These include Kew House, a modern co-educational senior school, The Queen’s Church of England School, Grove Park School and Lionel School. All within a mile of the development they are highly regarded for their thriving environments and are Ofsted-rated ‘outstanding’.

Appointments are now available to book by contacting 0208 168 0175 or verdo-kewbridge@ecoworldinternational.com. Further information on the scheme can on-site at ecoworldlondon.com/places-to-live/verdo-kew-bridge.