Imperial launches its new hub for innovation at White City 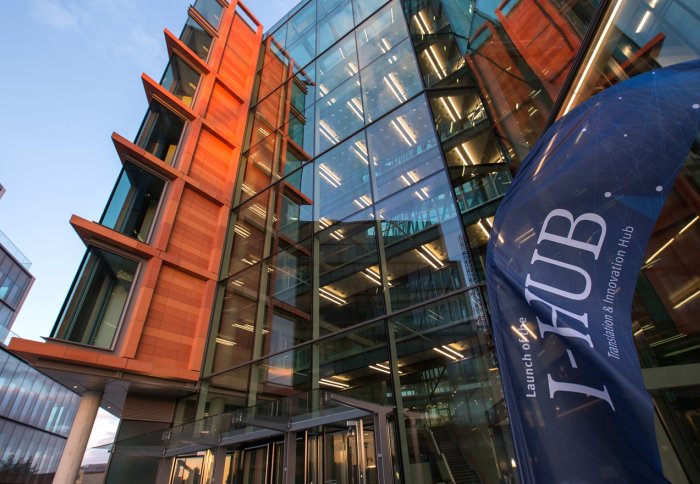 The I-HUB, Imperial’s new translation and innovation hub, launched this week at the White City Campus.

Providing more than 185,000 square foot of new laboratory, incubator, accelerator and office space, the facility will enable the co-location of start-ups, entrepreneurs, and major corporations alongside Imperial’s academic community.

A core aim of the 13-storey building will be to support the commercialisation and translation of research and innovation for the benefit of society.

“We are delighted to be opening this new landmark hub for innovation, incubation and collaboration, reaffirming London’s position at the forefront in applying leading-edge science.  Businesses in the I-HUB will be focused on taking fantastic research ideas out into the market where they can have a direct positive impact for society.  This is another chapter in Imperial College’s mission to apply the results of our world-class work in science, engineering, medicine and business, creating economic growth, high-value jobs and benefits for society.”

The I-HUB is operated by Imperial College ThinkSpace, which provides high quality laboratory and office workspaces to companies at every stage of their growth, co-locating them with Imperial College London.

Imperial College ThinkSpace Chief Executive, Dr Eulian Roberts, said: “The opening of the I-HUB is a significant milestone in the development of the White City Campus.  It will help businesses, both new and established, to reach new heights as they benefit from co-location with Imperial College London’s leading academics and the wider London research community.”

The building is the second to open at Imperial’s White City Campus – a research and innovation centre that is in its initial stages of development. At the 25-acre site, researchers, businesses and higher education partners will co-locate to create value from ideas on a global scale.

Working as a long-term partner and neighbour in the local community is core to Imperial’s vision for the Campus. Speaking at yesterday’s launch, the leader of Hammersmith and Fulham Borough Council, Stephen Cowan, said: “The I-HUB is a hugely exciting addition to White City, providing a massive boost for business and scientific research. It is also testament to the Council’s commitment to partner with the best and brightest institutions in the world, making Hammersmith & Fulham a fantastic place to learn, work, create and invest.”

Cllr Cowan added:  “It will pitch the brightest Imperial College London brains alongside cutting-edge businesses, support start-ups and help foster Hammersmith & Fulham as London’s hub for innovation. Imperial College London is a great partner for us to have in White City. It performs an important role in supporting the local community and getting them excited about what’s going on in their neighbourhood.”

The launch was followed by a two day Global Challenge Showcase at the I-HUB, with guests from industry and partner organisations invited to find out more about Imperial research and the new facility.