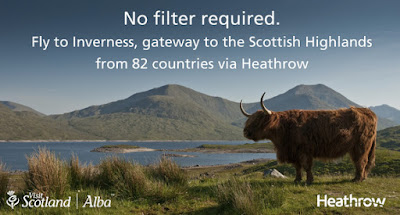 Whisky and Salmon are the biggest contributors to the value of Scotland’s international exports of food and drink and are key sectors in the area around Inverness and the Highlands. With over two-third of these companies in the region actively exporting, the route will make it more efficient and cost-effective for them to sell their products in new markets around the world.
The new route represents an exciting new phase for the north west of Scotland and Heathrow as the airport awaits Government approval for its expansion plans. An expanded Heathrow would have the extra capacity to ensure that airlines were not forced to prioritise more lucrative long-haul services at the expense of domestic connections like Inverness. With 40 new long-haul trading links, an expanded hub at Heathrow would also make it even cheaper for exports to get to new fast growing markets of the world.
Heathrow CEO John Holland-Kaye said:
“The Inverness-Heathrow route offers so much potential for the businesses and people of the north west of Scotland who for too long have been let down by the indecision on airport expansion. Today is a momentous day – Inverness joins Aberdeen, Glasgow, Edinburgh, Leeds, Manchester and Newcastle with a route into Heathrow and access to markets from Manila to Mexico City, from Chicago to Chengdu, from Hanoi to Houston. It means more growth and a more secure economic future for the Highlands and I’m delighted that we’re able to be a part of that future success.”
Andrew Dakers, Chief Executive of West London Business said:
“This new service further enhances travel options out of Heathrow, particularly for business travel connections. The continued investment in new connections out of the Heathrow hub will encourage economic development in the Highlands, Islands & Moray but also here in West London – one of the most connected places in the world from which to do business.”
Stewart Nicol, Chief Executive, Inverness Chamber of Commerce said:
“This is a very significant development for the Highland business community in terms of increasing the connectivity between Inverness, London and the South-East of the UK. This will make it much easier for Highland businesses to connect to markets across the world. It is also a significant endorsement of all that HIAL have done to secure the UK’s leading airline, and one of the world’s most iconic commercial airline brands, back to the city of Inverness. In addition to making it easier for Highland businesses to access global destinations from Heathrow, this route makes it much easier for tourists from across the world to get to Inverness.”