A team of Engineering Students from Uxbridge College have won a London-wide competition run by Transport for London (TfL) and sponsored by Cleshar.
Team Spectre triumphed out of a total of 20 teams by designing an app for use by TfL customers. The students were praised for the quality of their product, as well as their teamwork and communication skills.
A group of students from the College’s Business School, Team Falcon, were also one of the four teams who won through to the finals.
Laraine Smith OBE, Principal of Uxbridge College, said:
“We are really appreciative of the links we have developed with TfL. The students develop their employability skills and contacts through such activities as the TfL Schools Challenge, helping to ensure that when they leave the College their future prospects are even brighter.”
Rakesh Thapar, Section Manager of Electronic Engineering, who worked with the winning team, said:
“This was a great result for our students who showed strong technical and creative skill in producing their winning idea. The other teams put up strong competition and the brief was very demanding so Team Spectre was particularly pleased to win.”
Team Spectre said:
“Winning the TfL challenge was really exhilarating because it showed each of us that our ideas could be made into reality and that our hard work paid off. As engineering students we were thrilled that TfL staff thought we had a strong business plan as this was not our subject area. We had a brilliant time networking and learning how many of the directors were from engineering backgrounds.”
Team Falcon said:
“We thoroughly enjoyed the experience designing our app for TfL and were excited to be selected to go through to the finals.  This experience helped us bridge theory from lessons into a real life scenario for TfL, and the day at TfL also enhanced our employability skills through our engagement with a range of different employers.  This was a fantastic competition.”
Swaran Johal, Course Team Leader Business Level 3, who worked with Team Falcon, said:
“I was very proud of our learners.  They showed commitment to the task with professionalism and dedication.  TfL also gave our learners the valuable experience of presenting and answering any questions from the panel of judges.  Thank you TfL”
The competition, the TfL Schools Challenge, took place at the Institute of Mechanical Engineers, and students were asked to come up with an idea which would help keep London moving.
Both teams have now secured work experience at TfL as a result of their participation, which is expected to take place later this year.
Find out more about our teams in TfL’s video: https://www.youtube.com/watch?list=PLtnlusA0ZoghNAt80Ok-qEc-kmV7pV5Bb&v=mKote7_lVhQ 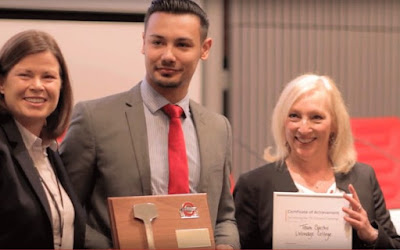